Friday 6thAugust, The Feast of the Transfiguration

The Anglican Church is an affiliation of independent national or regional churches in full communion with the Church of England (which may be regarded as the “Mother Church” of this worldwide family). So, more accurately it should be refered to as the Anglican Communion. There are currently 77 million Anglican Christians in the world. The Archbishop of Canterbury, the most senior archbishop of the Church of England, whilst having no formal authority outside his own English jurisdiction, is recognised by the churches of the Anglican Communion as a symbolic and historic focus and he is honoured as being “first amongst equals” by the other archbishops.

While Anglicans acknowledge that the repudiation of papal authority by Henry VIII of England resulted in the Church of England existing as a separate entity, they also believe that it is in continuity with the pre-Reformation Church of England. By the end of the 17th century the Church of England was describing itself as both Catholic and Reformed – it maintained the creeds and threefold ministry of the deacon, priest and bishop and also outlined its theological disagreements with the Roman Catholic Church but without following the influence of any particular Protestant Reformer. One reformation historian, MacCulloch, comments on this situation by saying that the Church of England “has never subsequently dared to define its identity decisively as Protestant or Catholic, and has decided in the end that this is a virtue rather than a handicap”. 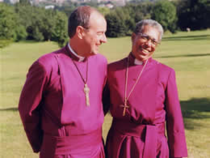 Consequently there is a very wide divergence of opinion and worship-style to be found within Anglican churches – Catholic, Liberal, Evangelical – and everything in between. Traditionally the Anglican Church has been termed a “broad church”, a large home in which people can discover somewhere to worship, learn and find friendship. The advice of St Augustine rings true to Anglicans: “in the primary things, unity; in the secondary things, generosity; in all things, charity”. Worship is most important for Anglicans and, indeed, the English Reformation is best known, not for drawing up dogmatic documention but for creating a book of common prayer. It is as if, instead of Anglicans wanting people to sign on dotted lines, they prefer to offer them a prayer book, inviting them to join in and to learn who they are, and what they believe, by immersing themselves in their liturgical landscape. Because Anglicans have a high doctrine of the Mystery of God they have a defined tradition of music, poetry and art which both enriches their worship of God and teaches human souls to fly nearer the divine reality God, unveiled in his body-language and self-portrait, Jesus Christ.

The four defining points which focus Anglican belief, identity and practice have been identified as: