Day 7 in the Week of Prayer for Christian Unity

No Coffee Time this morning

with Address & time for reflection & prayers

Monday 25th January, 8.30am Morning Prayer (Conversion of St Paul) with Reflection for "Candles in the Dark"

Sunday, 31st January,
11amSung Eucharist, Feast of the Presentation of our Lord,

Only the Chapel's Entrance is open at this time.

Our next Pilgrimage is to the Holy Island of Bardsey, the isle of twenty thousand saints, off the Llyn Peninsula in Wales. Dates: 4th - 11th August 2018. See poster below and contact the Office for more details. 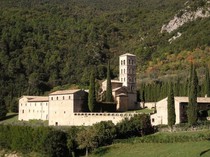 Pilgrimage to Umbria, Italy
"In the Footsteps of the Syrian Hermits, St Benedict, and St Francis of Assisi"
6th - 11th October 2016
We shall be staying at the Abbey of San Pietro in Valle was founded upon a Syrian Hermitage of the fifth century. The site also contains a wonderful church in which we would hold our services. The Abbey is now a hotel, which nonetheless has not lost its monastic ambience, positioned as it is in a secluded, strategic and majestic valley pass in the south of Umbria.

The Cloisters at the Abbey of San Pietro in Valle

Previous Pilgrimages in 2014 and 2015
In September 2014 the Chapel made a Pilgrimage to the Holy Island of Lindisfarne in Northumberland, the spiritual headquarters of Celtic saints Aidan and Cuthbert.

This year, on Saturday October 3rd, we intend to make a pilgrimage to the Cathedral Church of our province in Canterbury.

The Pilgrimage will involved a Guided Tour of the Cathedral, a Pilgrim's Mass, time for private prayer and reflection, and Choral Evensong.