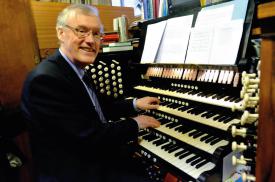 Richard Hobson was born in Yorkshire. He was a chorister at Lichfield Cathedral and read music at Wadham College, Oxford, where he was College Organist. After a post-graduate year at St John's College, Cambridge, he joined the staff of Latymer Upper School, Hammersmith in 1976, becoming Director of Music in 1982. In 1996 he became Director of Music at Merchant Taylors' School, Northwood, a post from he retired in 2012.  He retains his connection with the Worshipful Company of Merchant Taylors' as Organist at the Livery Hall in the City of London.

Richard has been Organist and Director of Music of the Grosvenor Chapel since 1981.  As well as directing the professional choir he arranges the weekly Mayfair Organ Concerts, and has recorded two CDs on the the highly acclaimed organ, completed in 1991, which he designed in collaboration with the organ builder William Drake.