Of English parents, Fr Richard was born in Switzerland, educated in England, and studied Philosophy and Theology at Oxford University. He went on to complete a M.A. in Systematic Theology under Colin Gunton at King's College London, and followed that with a PhD, supervised by Dr. Brian Horne and Prof. Christoph Schwoebel, entitled: "Spirit, Freedom, Identity. An account of how the Spirit's agency in Christian transformation is compatible with human freedom and personal identity." During his doctoral studies, research grants allowed him to spend time at the universities of Kiel and Heidelberg in Germany.

Fr Richard is also a qualified teacher of Religious Education and has taught at the City of London School and Haberdashers Aske's School for boys, and enjoys ministry to young people. 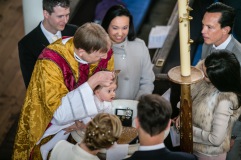 Increasingly drawn to a communal and pastoral expression of his Christian life, Richard was selected for ordination by the Diocese of London and trained at the College of the Resurrection, Mirfield, West Yorkshire. He served as an Assistant Curate at St John the Evangelist, Palmers Green, where with others he set up a youth network for the local deanery and and then the area, organising youth events with innovative alternative worship. As Chair of the Uniting Churches of Palmers Green, he organised their participation in London Soul in the City 2004, gaining lottery funding for an arts-based project involving local schools.

In 2005 Fr Richard offered himself for work overseas and was sent by USPG to teach in the theological colleges of the Anglican Church in Brazil. His role there became increasingly peripatetic, travelling to dioceses around the country to deliver courses, while also assisting pastorally and liturgically at local parishes. He contributed a number of published articles in Portuguese to the church's theological review and assisted with a NGO, "Espaço Vida" working with those who have HIV/Aids in Recife. 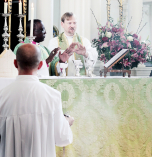 From Brazil, Fr Richard moved to be Assistant Chaplain at St George's in Paris, which has both an international English-speaking congregation and a French-speaking Malagasy one. During his time in Paris he led two parish pilgrimages, one to the Abbey of Citeaux, in Burgundy, the founding house of the Cistercians, and the other to 'La Grande Chartreuse' in the Dauphiné Alps, the home of the Carthusians (as in the film 'Into the Great Silence').

Since 2010, Fr Richard has been the Supervisor of the "Mission and Ministry Programme", of London Diocese's companion relationship with the Diocese of Angola, part of the ALMA link (www.almalink.org).

Fr Richard is married to Giseli, who he met while in Recife, Brazil. They are both qualified massage therapists and enjoy music, cinema, and dance together, and visiting friends and family in Brazil.

Since his arrival in Mayfair, Fr Richard has tried to re-engage the Chapel in its calling to mission in Mayfair. He has helped organise events for the community from Ventian and Brazilian Carnival nights, to an Opera Gala, St George's and St Nicholas' Day Services for children, a Children's Singing Club, helping to found the Mayfair Community Choir and an art exhibition called "The Book of Life" jointly with the Royal Academy of Arts, the Kids Company and St George's School and the Chapel's participation annually in "The Mayfair Art Weekend" (MAW). He is in his second term as an elected member of the Mayfair Neighbourhood Forum's Steering Group that has drawn up a Local Plan for Mayfair, shortly to go to referendum.

During his sabbatical in 2017, he wrote a mongraph on the Portuguese poet Daniel Faria, "Poet and Pilgrim", for which he translated the bulk of the poetry. The book introduces selected poems and offers a commentary to aid the readers to participate more deeply in the poet's vision.